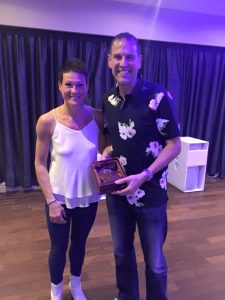 rs celebrated a memorable year at their AGM and awards night held at the Hi-Tide last Friday.

As well as individual recognition for some outstanding running, the club’s continued team success in both the West Glamorgan Cross Country League and the Bridgend County Running League was noted.

Both the men and women’s teams only narrowly missed out on promotion to Division One in the West Glam, while the men finished as the highest-ranked Bridgend club in the area.

Geraint Lewis was the club’s leading finisher in the West Glam individual standings in 15th while the women were led by Deb Goule, third overall and top in her F45 age category – part of a catalogue of achievements throughout the year that landed her the female club champion award.

And in the BCRL the club finished in a respectable fourth place of the seven clubs in 2017 – up from fifth of six the year before.

More notable though was their record shattering entry of 47 for the BCRL Merthyr Mawr Lane 5k event – which was also equalled at the first event on this year’s calender, the Ogmore Castle Trail, last week.

Individually Dave Bennett was out on his own for the men and it was no surprise when he also landed the male club champion award. 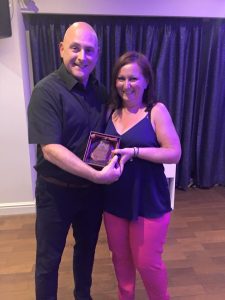 Other notable recognition on the night went to Alun Williams as most improved male while Mandy Dumagnee took home the most improved female prize.

The club’s own parkrun championship was won by Mark James and Sue Thomas respectively.

The chairman’s award went to Kerry Dare-Edwards while the Runners’ runner of the year was Louise Mordue.

Clubman of the year was Steve Picton while Lindsey Kale bagged the Clubwomen gong.

The presentations were preceded by the formal business of the AGM when it was decided that Alwyn Thomas would continue as treasurer while Gareth Mole and Toni Cosson also stay in their respective roles as chairman and secretary.